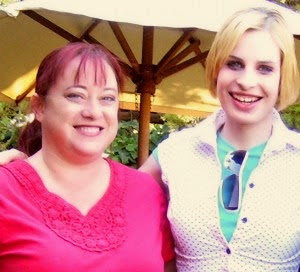 Editor’s note: Suicide and the loss of a child are discussed in this interview. Appropriate trigger warnings apply.

TransEthics: You are the first cis person to be interviewed by TransEthics. Being the parent of a trans child, I imagine you have a somewhat unique perspective. But first, tell me how you personally feel about the use of the words “cis” and “cisgender”.

Jules Vilmur: I hear people complain about the use of cis and cisgender, but it doesn’t bother me. I get the need for it in conversations about gender and such. There’s a lot of eye-rolling by cis people at the thought of having to qualify their gender but for me it’s a way of understanding that gender sometimes does need qualification.

TE: I know you’ve written it all down in your book The Complicated Geography of Alice, but would you please share your initial feelings you had when your daughter came out as trans?

JV: There’s nothing to compare that feeling to – complete and utter shock – not disbelief and not disappointment, but shock — that everything I thought I knew was different. I had trans friends, thank god, so I could wrap my head around it, but I never saw it coming — I never would have guessed. Beyond that, I felt fear for her and all the things she was going to face in the fight to be herself.

JV: It made SO much sense, especially in relation to the drugs and their ability to make one feel like someone else —  take us out of ourselves. She was always trying on new personas: the little soldier boy, the super stoner kid, a little wannabe gang-banger ,and none of them ever quite fit. So the sad turned to angry — it made all the sense in the world.

TE: She came out before Leelah Alcorn’s suicide. How did that event affect your family?

JV: I was crushed by Leelah’s death. Like everyone, I read through her Tumblr and that last letter. My husband, he mostly insulates himself from such things because it’s too close to home, but her family could have been our family. I grew up in a fundamentalist evangelical Christian home and my parents would have done exactly what Leelah’s parents did if one of their children had been trans.

Leelah’s death and the fallout from it prompted a conversation between some of my childhood friends who are now ministers and youth pastors, and I was able to give them some suggestions and insight into how they could affect and protect kids like Ashlie and Leelah within their churches. My instinct is to steer clear from religious bullshit, but I think we have to educate those who are willing to listen, and change within those communities. The nationwide focus on changing the laws around queer youth and counseling — I wish they were both here to see that.

TE: No parent should ever have to lose their child. How can we — cis people and trans people — work together to (in Leelah’s words) fix society?

JV: It’s a difficult question with so many answers, from fighting bad bathroom bills to advocating for healthcare resources. Leelah’s law is a step, but there is so much more work to be done. I do believe that cis people need to take up the fight, carry some of that burden, support trans people in their schools, offices and communities. But it’s not like it is with gay and lesbian people — most people have never met a transgender person… they are this unimaginable Other for many people.

Like with our friends and family, Ashlie was the first trans person many of them ever met and knowing her definitely changed how they view trans people. I don’t know how we break through that wall, to undo that Othering, but for me, for our family, we talk about our lives and experiences so that even without meeting Ashlie, people who meet us will have that personal connection.

I think relying on the LGB to advocate for the T is not particularly helpful. It’s time for straight cis people to speak up for and stand with trans people. How we get there from here, I still don’t know.

TE: Why do you think society seems to have such an aversion to trans people — trans women in particular?

JV: My first trans friend was Mateo and when I introduced him to my family, my hsuband said, “I get it. I mean, who wouldn’t want to be a man?” But when he met Chloie, my trans female co-worker, he was less comfortable. There’s definitely an element of sexism in the treatment of trans women, as well as ignorance, even from people who are generally open and accepting.

Like just this year, when my friend Chloie had to fight CrossFit — had to explain detailed physical and hormonal changes to them because they honestly didn’t understand. (They were also assholes, but mostly just ignorant.)

I was dreading the Jenner interview — have cringed for the better part of a year every time I ended up in the checkout line where the magazines were unavoidable. But if humanizing trans people and educating the public on the struggle – if that comes out of Jenner’s spotlight then I’m glad.

TE: Just one more question: A recent study done by the National Center for Transgender Equality showed that 47% of trans people attempt suicide at least once. Why do you think that number is so high?

JV: On one of her worst days, my daughter said “I’m only still here for you.” It was wrenching because you want to make everything better, easy, but you can’t. I think that internal struggle must be excruciating, but I believe that a better world, safer schools, access to healthcare and strong social support can ease that.

The best thing I and other cis people can do to help is just show up, listen, and then go out and advocate for our trans friends and family to get the support and services they need. We could lower that rate and we must do so.

TE: Thank you for sharing today with us, Jules.

JV: Thank you for asking.