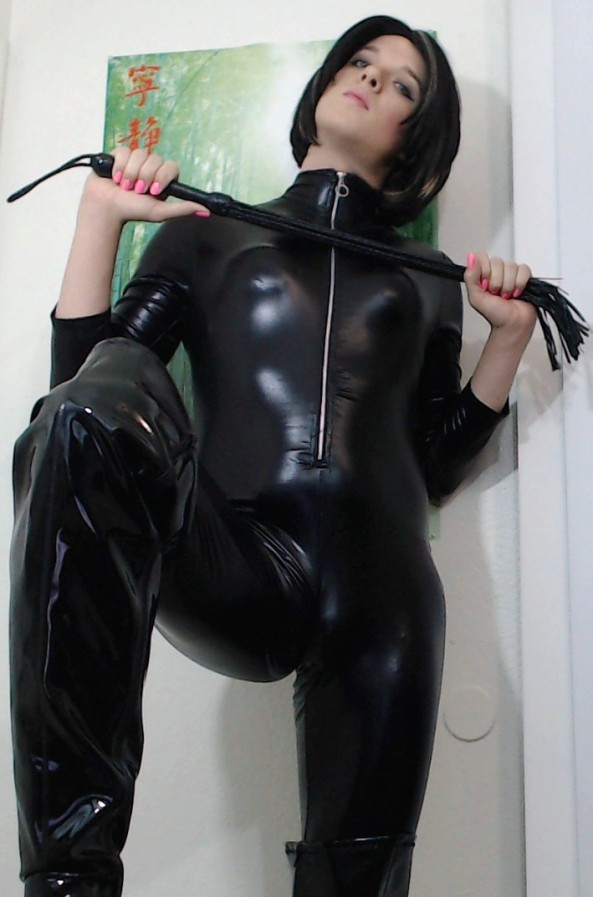 TransEthics: How old were you when you started pursuing sex work?

Stacy Sadistic: I was 23 when I first started doing things for money, but I had been in the fetish scene for many years before that. I had a girlfriend who introduced me to the fetish world. She took me to lots of fetish events, and introduced me to new things and new people. I grew up in a small town, so I was kind of repressed. I reluctantly got into cross-dressing at her request, but soon found that I really enjoyed it. We had sort of a switch dynamic, but after many years together, I realized she was abusive, so I left.

But, after some bad experiences with multiple dominants, I didn’t really trust anyone to be the dominant, so I decided to take on that role myself. I read a lot about it, went to workshops and other events, and trained with other people. I decided that I wanted to be the “safe, sane, and consensual” dominant I had been looking for, I wanted to be that for other people.

TE: What’s the most important thing for a Domme to remember when dealing with a sub?

SS: Hmmmm… I guess that depends. For an experienced Domme, I would say that its important to understand that each submissive is different. You can’t just have a cookie cutter style that you use on everyone. People have different things that induce their juice, and they also may react negatively to certain stimuli. So its good to take things slow, and get to know who you’re dealing with. But if you are doing online sessions with men just looking for a quick way to get off, that’s not always possible, so it’s a challenge.

For a less experienced Domme, or someone just getting into it, I think safety and consensuality are the most important thing to focus on. It might not be sexy to sit down and go over a big list of what is acceptable and what’s not. A submissive can get pretty antsy and try to push things to go faster, but in the long run, they will respect you more, feel safer with you, and speak well of you to others.

Making sure that everything was safe and enjoyable for my submissives, was a real big focus for me starting out. It is important, and as a new dominant, it takes time to build that confidence. After I had been doing it for a long time, I started to realize, that it didn’t always have to be so serious 100% of the time. So if you’re a Domme that has been around for a while, and you’ve got some experience under your belt, I would say, don’t always take things so seriously, just have fun with it. That’s something important that I wish someone would have told me when I was ready to hear it, but it’s not the kind of thing I would say to someone who is brand new.

TE: You mentioned that you were coerced into cross-dressing with your ex. At what point did you realize it wasn’t a fetish, but a symptom of something else?

SS: I remember the first time I did it, I looked into a mirror, and was like, “wow! I’m like really fucking hot!” But the thoughts that I might be a transgender woman, those didn’t really come around until about a year later. I just really liked it, I was really happy when I was presenting that way, and I wanted to do it more and more. It was a hard conclusion to reach though, because I did not fit the standard trans narrative (someone who had always known, and had dressed since a very young age), and because of my strong sexual attraction to women.

My social media of choice at the time was Fetlife, and lets just say it’s not the best way to learn about all things transgender. There’s a lot of [transphobes], lots of [transier-than-thou types], and lots of old bitter cross-dressers & sissies with strange ideas about things. I did manage to figure myself out though, but things had to get pretty bad before I was brave enough to come out of the closet. My life presenting as male was going nowhere, I was alone, I didn’t have any friends, the connection to my family was non-existent, and I was unappreciated at work. I wanted to die, and I realized that abandoning my life presenting as male was the only thing that would make me happy again.

TE: What was it that finally made you come out?

SS: Well, I like to think of “coming out,” as a lifelong process. For some, it’s just so blatant and obvious, its apparent to everyone, and they don’t really have a choice about it. But everyday, I run across people saying, “oh you’re trans? oh wait, you’re a lesbian?” And its something a person continually has to deal with. But for the first time I came out, like en masse, to lots of people, I needed to know that it was safe first.

I had been working as a cam model on the weekends for almost a year before I started doing it full-time. My day job just kept getting shitter and shittier, and like I said, I was pretty miserable presenting as male. The one thought that kept running through my head was, “if I can just make enough money from camming, then I can quit my day job, and do it full time, then I can be who I really am 24/7.” One day, that job fired me, and I’ve never looked back. If I hadn’t felt that I was in a safe position to do that, I wouldn’t have come out, but I understand that lots of girls don’t have that luxury.

Since then, I’ve went back to school, and have even started working other corporate office day jobs, and every time I have to go into a room full of cis people I’ve never met, its like coming out all over again. It gets a little bit easier, but you never know how people are going to react, so it can be very stressful.

TE: What is it you currently do apart from sex work?

SS: I’m one of the lucky few who is actually able to support themselves on sex work alone. Still though, its a hustle. I sell videos, panties, do phone sex, manage my website (StacySadistic.Com), and I dominate submissives online and in person. Besides that, I’m also going to school full-time. I’m currently studying to receive a B.S. in business management, and lets just say that business school is not the most trans-inclusive space. I’m the first and only openly trans woman in that entire college.

TE: Do you encounter a lot of discrimination at the college you attend?

SS: They’ve made an effort to be inclusive, but there’s just lots of little things. For example, they refuse to give me a school email address that does not include my dead name. Then, they force us to do a lot of group work (which has its own problems), and give out my school email address to everyone in class so that we can contact each other. Of course that is directly putting me in danger of violence, but they don’t seem to care.

We have to give a lot of speeches, and there’s a dress code for that. That was a huge hassle and a big expense I couldn’t really afford. I had spent a lot of money accumulating a wardrobe for sex work, then I had to spend more money to acquire “normal girl” clothes to wear to school day-to-day, and then on top of that, they were making me buy a bunch of clothes that were “office appropriate” attire.

Let me tell you, it’s not easy finding a dress that will come down to your knees when you are a 6’4″ trans woman, and size 14 dress shoes aren’t exactly easy to find either. I’m hoping that the President’s recent executive order regarding trans students changes some of these things. He’s threatening to cut off federal funding to schools that don’t comply, and I find that real change usually doesn’t start to happen until money is involved.

TE: Do you think the attitude towards trans people (trans women in particular) is shifting in a good way?

SS: Definitely. [Trans people are] no longer acceptable to use us as a punch-line. In the mainstream anyway. Sure, it still happens, but people are thinking twice about it. I feel like its running the same course that the public view of gay men has. It starts with the public. More and more people are coming out, the public is being educated, and they’re telling each other that trans people are actually okay, they’re not freaks. Lots of people are realizing that they know somebody who is trans, so they tend to stick up for us among their cis friends, and they’re making efforts to be more inclusive. We really have a lot of mainstream support, and the corporations and politicians are starting to notice that. They are starting to realize the tide has turned, and they don’t want to be the last one to join the party. I’m seeing a lot of companies –sex work [companies] included–  that are starting to change their policies towards trans people.

TE: Do you think that Equality for trans people will happen in your lifetime?

SS: No. I don’t even think equality for cis women will happen in our lifetime, or for people of color. The movement for trans equality is really just in its infancy. These groups have been seeking that for over one hundred years, and they are still fighting. But maybe I will get turned into a vampire or a cybernetic marvel or something, then the answer would be yes.

TE:One last question: What advice would you give to a Domme who is just starting out?

SS: Learn as much as possible. Being a Domme usually entails having to dabble in all sorts of fetishes. People shouldn’t just respect you because you are in a certain position, but because you know what you are doing, and are skilled at your craft. Practice. Plan out your scenes beforehand, and be ready for complications. Network, don’t be afraid to talk to other Dommes. There’s a big community out there, there’s plenty of room for you, so it’s not like you have to steal another person’s clients to be successful. We all have a different style, and watching the way another Domme approaches things, it can be very educational, and inspire you to improve.

Lots of submissives, especially men, will try to take advantage of you, and tell you that their submission is a gift in and of itself. They need to realize all of the hard work you put into training yourself, planning out scenes, and maintaining control. Watch out for people trying to “top from the bottom.” When you cut problematic submissives off, they may get with the program and come back around, but even without them, there are plenty of people who will value your work. Have fun with it, be safe, and don’t take shit from anyone.

TE: Thank you for taking time out of your busy schedule to chat with us today.

SS: No problem. I’m really excited to be one of the many interesting people you’ve interviewed. It’s really nice to have more media representation of trans women by trans women. You are doing great work.