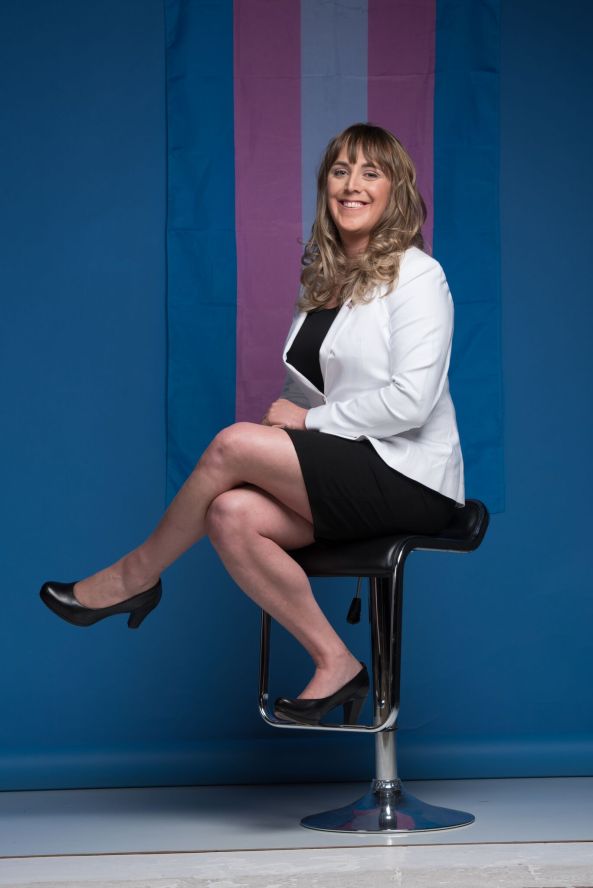 TransEthics: What was it that first got you interested in politics?

Brianna Westbrook: I’ve always been interested in politics since a young age. I love being a leader for people. I just never thought that I could run for office until recently. The confidence was not there for me in my earlier years of life. The election of Donald Trump is what pushed me to use my voice. That was my breaking point. I saw a storm coming last year when he selected Mike Pence as his running mate.

TE: What was it about Pence that made you decide to run for Congress?

BW: The fact that he is anti-LGBT to the extreme. The things that he has said of the years such as gay couples are the societal collapse. He has opposed laws time and time again to prohibit discrimination for LGBT [people] in the work place, believes in conversion therapy… the list is long. Pence alone is not what made me run for Congress though. It was a number of things coming together for the call of action. Pence was the final straw for me.

Over the years I, just like many people throughout this country, have become sick and tired of waiting for a politician to truly take care of the issues that matter. Most of our elected officials put the interest of their big money campaign donors before the interest of we the people.

TE: You’re running against incumbent Republican Trent Franks for Arizona’s 8th District House seat. Aside from LGBT Rights, what separates you from Franks?

BW: What separates our campaign from Franks is that I am a working-class person running for the people. I say OUR because this campaign is for District 8. It is not about me. I am just the voice. Trent Franks is a millionaire that is out of touch with our district. He lives in a million dollar home and has a net worth over 30 million [dollars]. While the average home in my district is worth 266k and the average income in Maricopa County is $55,054. He is not a representation of the people of this district.

Since he was elected years ago he has done nothing to fix our broken public education system here in Arizona. Which should be one of his focal points in Washington. Arizona’s public education system is ranked near dead last nationally. Trent Franks is a one issue representative he caters to his hard Christian base and is hell-bent on abortion. He does not want to expand or protect Medicaid, Medicare or Social Security. He opposes a Medicare-for-all approach to healthcare, which is absurd because health care is a right. Whether you are poor, rich, or have a preexisting condition, you should be able to get the health care access you need in this country. He opposes everything [related to] Climate Change. Why? Because he is owned by Dark Money – the majority of his campaign contributions come from the fossil fuel industry. He, himself is owned by oil, his brother and him founded an oil and gas exploration company.  He opposes legislation that invests in clean energy because it directly impacts his own personal pocket book.

TE: Healthcare is a hot-button issue right now for most Americans. What kind of policy would you like to see in place?

BW: Well if I was in the House right now I would be sponsoring H.R. 676. Health care is a right. We need Medicare for all system. We as a country spend more on health care than any other nation in the world, yet provide the least amount of coverage. This must stop and we must adopt a universal health care system to ensure all citizens have access to quality medical care. We must put an end the system of allowing private, for-profit companies to dictate the quality and type of care we receive and put the decision-making powers in the hands of doctors and other health care professionals.

TE: Trump recently cited the cost of trans-related medical care as a justification for his attempt to ban all transgender military personnel. How do you respond to this?

BW: Well I wish he would just come out and tell the truth, but that is impossible for Trump. The cost of medical care for transgender soldiers is very minimal compared to the cost that is spent on erectile dysfunction medication, which is fives times higher. The cost for care for transgender troops is estimated from $2.4 to $8.4 million per year, which is less than 0.14% of the total military’s medical budget. The truth of the matter is from what I have read is that this surprise tweet by Trump was a way of him keeping his budget bill alive in the House – in that budget bill is his campaign promised Border Wall. So basically he believes in trading human rights for votes. We are seeing more and more fascism from the Trump administration each day that he is in office.

TE: Transgender people in the military aren’t the only ones in the crosshairs. Your opponent is a sponsor of HB2796, erroneously called the “Civil Rights Unification Act“. What are your thoughts about this bill?

BW: HR 2796 I would hope would not pass through the House, and I really do not think that it will, but given today’s politics… who knows?! It is a bill to watch for sure. It is a very scary bill for the Transgender community.

A bill like this is a great example of the importance of my voice in Congress. If I was in the House I could be a vocal leader on the floor to combat this bill. Being an openly transgender woman my voice carries more weight on this issue than any other member in the House.

TE: Has your gender been an issue in your campaign?

BW: No it really has not, which is quite surprising. I get occasional bigot comments on the Facebook page, but from progressives in my district they see it as a badge of strength. I’ve had to endure a lot. It shows my mental fortitude and people want someone who is strong representing them in Washington.

Being transgender in government should be seen as a huge quality because we have lived in two different worlds. I’ve lived in a man’s world and a woman’s world. I see the sexism first hand now living as a woman. I see the barriers that women deal with in the workplace.

TE: Do you suspect that your opponent will bring up the fact that you’re trans in a debate, or make your gender a political matter?

BW: Unfortunately, it is a serious possibility that my opponent would bring up such a thing as leverage for some of his political base. Just like how Trump has targeted trans people and other vulnerable minority groups in his hateful rhetoric, it is realistic to expect my political opponent to act in a similar fashion to drum up some of his reactionary voter base.

TE: Have you thought about how’d you respond to such a tactic?

BW: Yes I have and I will let my actions and political message stand for itself. Let the voters decide. I don’t imagine outright bigotry is going to hurt me so much; it may even add momentum to my side if things get particularly heated. We have seen it with the resistance movement since Trump has taken office. When they attack us, we the people just get stronger.

TE: Just one more question: Why should voters in District 8 vote for you?

BW: Great question. The people of District 8 should vote for me because I will never forget that we the people deserve a government of the people, by the people, for the people. No other candidate here, to my knowledge, is taking seriously the issues of connecting various working class communities, and using an intersectionality lens to view the world.

TE: Thank you for taking the time to speak with us today.

BW: This was great. We will do it again!