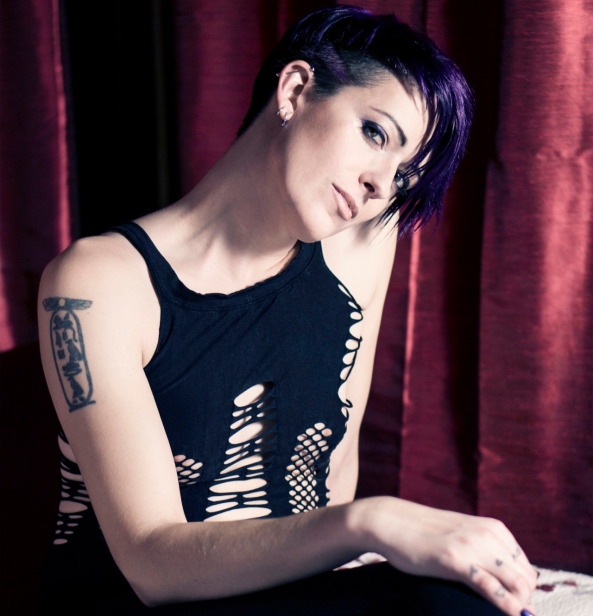 Trans Ethics: How did you get into the sex industry?

TE: Perpetual sexual arousal without focusing on orgasms is something that is quite original given the nature of the Industry. Do you find this being an overall hard-sell?

TE: Considering some of the health issues surrounding being a trans woman, and that spironolactone can cause renal failure when used long-term, do you think the Industry as a whole should be focused less on ejaculation when it comes to trans women?

As to the specific health concerns of trans performers, I’m not a doctor. Most people don’t stay in the industry that long anyway, so I’m not convinced that being on T-blockers constitutes a huge health risk, although clearly going on and off them repeatedly is not going to be good for you.

TE: How would you like to see the depictions of trans women evolve in the industry?

TE: Do you think terms like “tranny” and “shemale” are on their way out where the Industry is concerned?

EE: Yes, I don’t think there’s any doubt about that.

TE: How do you feel when trans women use those terms to market themselves in the Industry?

EE: There is still a definite financial incentive to use those terms, and if people are comfortable with those terms, or identify in that way, that’s fine. I think a lot of the rhetoric surrounding the use of those words is less about the words themselves, and more about long-standing divides within the LGBTQ community. Trans women are perhaps the least cohesive group imaginable so I’m [reluctant] to generalize, but straight-identified and queer-identified trans women tend to be two different communities politically speaking. So I try not to look at the conversation as being so much about those words as it is about broader views about business practices in general. If you don’t think business should have any particular social responsibility, then using those words will appear harmless to you. Or if not harmless, then justifiable in the pursuit of market advantage.

TE: Your Tumblr profile mentions magic. Care to expand a little on that topic?

EE: As a child I grew up in a profoundly magical environment, and I felt very strongly connected to the world around me. My parents were agnostic pagan Buddhists I suppose, and my sister and I never had any formal religious upbringing. We grew up with folktales and fantasy stories, and I think we developed out own sort of spirituality. I spent a whole summer inventing a religion with a friend when I was like 7…  holy scriptures, rituals, the whole lot.

I also never had strongly enforced gender roles growing up, so it wasn’t until I hit puberty that being trans ever really felt like a problem. Once I did hit puberty I began to realize that I wasn’t just going to wake up in the right body one day, and ended up doing a lot of drugs to cope with that. There was no LGBT community in rural Southwest Wales, so I really didn’t have the language to know what was going on. Eventually that disillusionment killed my sense of magic in the world. I became firmly atheist, and spent the next 17 years trying to “fix” my brain through intellectualizing all my problems away. That really didn’t work. I was diagnosed bipolar, had alcohol and drug abuse problems, developed chronic pain, and was often suicidal.

When I finally came out as trans (actually, it was the 6th time I’d come out, but apparently each time I’d told someone previously, I’d then get blackout-drunk and couldn’t remember ever having done so) and started on HRT, for the fist time in probably twenty years I started to feel that sense of magical connection to the world again. I’d always felt a little sour that science seemed to rob the world of magic, but since I embraced science, and science allowed me to embrace myself, that part of me that I’d been missing for so long started to come back.

Since I switched over to an Estrogen based OS my bipolar episodes have stopped, 90% of my chronic pain has gone, I can think more clearly (my short-term memory is demonstrably better, it’s almost scary), and most importantly I have my emotions back. So when I talk about magic, that’s what I’m talking about. For me it’s that sense of connection to the universe: it’s not metaphysical. It’s very real, it’s measurable, it’s profound, it is magical.

TE: Wow. That’s powerful. With that in mind, what advice would you give to a trans woman who is –for whatever reason(s)– still in the closet?

EE: Oh goodness, don’t ask me that! I couldn’t possibly know what to say. Our lives, our circumstances, we’re all so different. I never want to offer advice without having some idea of a persons situation, and even then I don’t feel I’m qualified to weigh in on another’s situation. I can speak to my own experience, and if some of that rings true to someone else then I’m happy, but shit.

I guess all I really have to say is do whatever you have to survive. So long as we’re alive, we still have options. Don’t come out if you don’t feel safe, but do everything you can to get yourself to a safe space. The world can be really shit to trans people, but it’s getting better and there are places where you will be able to thrive. You just have to do everything you can to keep yourself alive long enough to get there.

What I would like to say, more generally, is that some of the oppressions I experienced a year ago I don’t experience now because I stopped looking for them. I think when we first come out, we’re looking for identity, we’re looking for a narrative. Oppression, injustice, and discrimination are all part of the trans experience, but they don’t need to be a part of our narrative. Being trans is not the most interesting thing about you.

When I feel isolated, or I feel that some aspect of my experience is so unique to being trans that my cis friends could never understand, I make a point of challenging that assumption in myself. I always try to reach out to my friends with the assumption that they may have experienced something very similar. I truly believe that for it to do us any good, empathy must be a dialogue. I take it as my personal responsibility to extend trust to people when I need emotional help, and what I’ve found is that nothing I have experienced as a trans woman was so wholly unique as to be unrelatable to my cis friends.

We need community, because we will always have a greater interest in our own needs than our cisgender friends and family, but I see too many people depending wholly on the trans community for their emotional support and I think that leads to an isolationist and tribal mentality. We’ve got to learn to give others the benefit of the doubt, because if we don’t it not them who suffer, it’s us.

TE: That was fantastic! Thank you Evie.

EE: You’re welcome! thanks for asking such thoughtful questions!